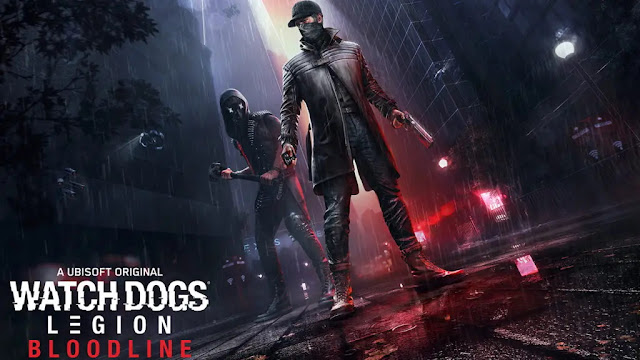 I loved Watch Dogs Legion: Bloodline. At first it was because I loved the first game and playing as Aiden again felt great. I enjoyed his story of revenge in the first game. I wasn't expecting Bloodline to actually go further into Aiden's story. I was expecting Aiden to be a gimmick character. But his story is so freakin cool and good!!! (I'm not gonna spoil anything.)

I loved the stories of both characters we follow in Bloodline, Aiden and Wrench. I didn't care for Wrench at all in Watch Dogs 2 and I had no interest in him in this DLC either at first. He became interesting to me once he took the mask off. No longer the fool but an actual hero. Reggie is amazing. I can't stand the masked character. (lol)

Gameplay wise, Bloodline gives both Aiden and Wrench the ability to instantly switch the spiderbot from ground mode to air mode (only in the DLC specific campaign sadly). That reminded me of switching between the drones in the second game. It also passively fights if you just leave it out. That's pretty neat. Wrench's cargo drone is super fun to play with.

Mission wise there's a few special things thrown in as is always easily forgotten but is something Ubisoft teams do in every single game they put out. There's always special missions that I wish there was a whole game made out of or at least a lot more of those types of missions/story parts. This was all about the story for me and I dug it. I also loved the stories in the main campaign so I'm not surprised I enjoyed the DLC so much but I am glad to be so satisfied with it.

I'm a little disappointed that Aiden and Wrench use most of the same animations as the regular NPCs when it comes to takedowns in melee combat. I'm not surprised since there weren't that many takedowns in the game anyways but it still woulda been nice if all of these paid characters actually had completely unique move-sets and such. They are super cool characters and are very special but they still also have the same old regular moves, you know?

Storywise, I love getting a bit more into Aiden's original revenge story. It was so good it feels like it shoulda been in the original game. (Not a complaint, just a thought.) I also love the little bits in this story that link to the second game and the characters involved. I also always really dig the political aspects of story that Ubisoft has in most of their games.

I recently picked up the Season Pass for Watch Dogs Legion on PSN for $20 on sale. I had originally pre-ordered WD:L at full price. I didn't want to wait for it to go on sale. I love the Watch Dogs games. If you're interested in my review of WD:L, click this. I wrote it in November of 2020. I still think the first two games are better and the first one is my absolute favorite by miles.

Watch Dogs Legion has always felt a little incomplete to me when it comes to mission types, the way the A.I. interacts, and extra playable content but I still really enjoy it overall. I still wish we could get closer to the original game. 2 and 3 have just gotten further away each time. (I love 2 as well.)

I checked out a little bit of the co-op and multiplayer modes when they first launched. They were pretty fun. I don't expect that I'll get into it enough to review the online element.

Thanks for reading. Game on. Feel free to send me questions any time. (I apologize if I don't see it for some reason.)