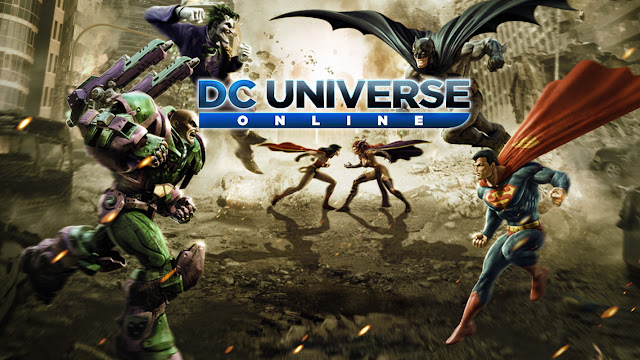 I love DC Universe Online. It's always one of my most recommended games whenever anybody asks what free-to-play titles to try.

There was a recent update that looks pretty cool. I'm always impressed every time I see news on updates. It always blows my mind how the game has stayed alive for so long when nobody really talks about it or even streams it on Twitch and stuff.

DCUO is easily one of the coolest super-hero games I've played. There is a lot of stuff that happens quickly especially since the game has been out for so long. I guess they might want to do some kind of re-scale of the leveling (like WoW did) or adjust the quest system itself. You'll be level 30 before you do thirty of the beginner quests (slightly exaggerated) so it makes it a bit awkward to navigate through and decide how to play. It's a really great game, though, and totally worth trying.

Anyways, the most recent update which has lots of cool stuff also removes the requirement for a subscription in order to play all the content. That is incredible news for all players. I was always impressed by the subscription benefits, though.

Oh yeah, if you didn't know, the way the Episodes worked before was that new content updates that included dungeons or raids wtih new stories were paid DLC. There were Episode DLC packs but if you were a subscriber you would always have access to all content as long as you were subscribed. As someone who played World of Warcraft for many years, had subscribed to DCUO at launch date (pre-ordered before it was F2P), and played Final Fantasy XI and FFXIV, I was used to the idea of paying a sub and I felt the content was worth it.

It's easy to also assume that this change in the subscription model could be because the game is losing players. Maybe. Either way, it's an excellent update for free-to-play players. I hope they can maybe quickly update the questing system because you really do out-level stuff too quickly now. It really is like what World of Warcraft went through as well. The game has been out so long and now it would be good if the early questing system was revamped to fit everything else that was updated. I think anyways. That's how it feels to me.

I have tried multiple times recently to jump back into DC Universe Online and play the game, as I do with many different games often, and I'm just not in the mood right now. I really wish I was. Like Marvel Heroes, I finally got back in the mood to play the game right before it shut down. I was like noooooooooo.

If you still haven't tried DCUO, it's on all platforms including the Switch (not Android/iOS though), PS4, XB1, PC. I imagine PS5 and XBS as well? Also if you tried it before and didn't like it, maybe try it again. Maybe you'll like it this time. And if you don't, you don't.

A quick "tip," the character customization is pretty cool and has a lot, but you unlock even more after you start playing the game. Definitely create a character you're gonna wanna play as for awhile, but know that you will unlock every single customization from that menu and hundreds more while playing. And you can change your costume and colors at any time. There are a couple limitations like can't change skin type or whatever but overall it's epic!

Thanks for reading. Game on.

I wasn't planning to write a post about this game because I've only played a few hours of it and it's a short game so I don't have much to say. But the more I think about it, I at least want to say something! It's Not Red Dead Redemption I've seen a lot of people immediately assume it's similar to Red Dead Redemption simply because it is a western. It is nothing like RDR! It's a simple extremely fun arcade shooter. I think of it like those arcade games where you pick up and use the plastic zapper guns to play through, only in this one you control the movement of your character and don't use a plastic gun. Story Telling... Differently The story is really neat, I like that you get to see a new take on very famous cowboys like Billy The Kid, Butch Cassidy, Sundance Kid and several others. You play the role of Silas Greaves who is telling his story to a group of people at a bar while playing poker or somethin. I can't say why exactly, but i f