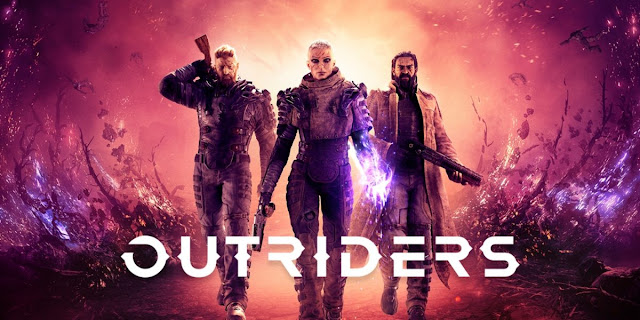 Outriders is a very generic, boring, and outdated game with a decent story. It feels like something I would have played on the PlayStation 3. I don't hate the game and there are cool things about it. It just doesn't feel new at all.

I was very excited for Outriders cuz I loved Bulletstorm. I could tell that it would not be anything like Bullestorm in the gameplay previews the developers had shown. That didn't stop me from being excited for a different type of shooter from the same team.

Gameplay wise, Outriders is fun enough I guess. I wish hipfire was a bit smoother and easier to do. That's one of the things that feels dated about it, not being able to confidently use hipfire. Especially when a lot of the combat ends up being very close-quarters which is my favorite type of gameplay. I always run in and get myself killed or do the killin. The abilities are very fun to use with some kickass and impressive animations.

The gear and the weapons look awesome. I love the designs of a lot of outfits and weapons. They're not something you see in every game and I would call them unique as I don't usually recognize them and can't spot similarities to other games right off which is great.

I love the gear bonuses in Outriders. They may randomly add additional charges to abilities that you can normally only cast once before a cooldown and now you can cast twice. That is super cool. I also love the types of elemental effects weapons can have. My favorite is the one that lifts enemies into the air. That is freakin hilarious and cool.

I was writing the above after about a week or two of playing while putting my thoughts together. I cancelled my Xbox Game Pass a week before it expired and stopped playing Outriders. I liked it and will probably return to finish it one day. I would just rather play Destiny 2 (which is an incredibly sloppy game but awesome).

Here are notes I had written down when I was planning to do a full review:

Thanks for reading. Game on.