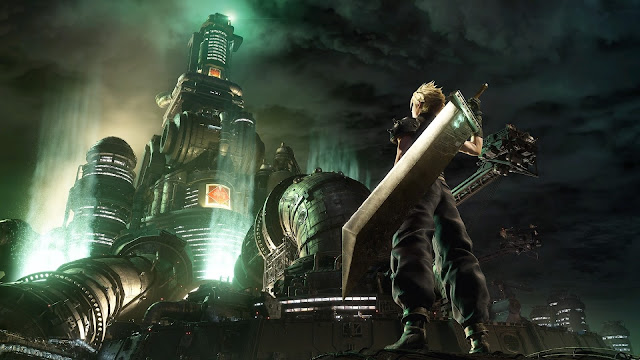 First, generally I loved Final Fantasy 7 Remake. I was a very hardcore fan of the original game in its time. I had unlocked the gold chocobo and Knights of the Round as well as beaten both Emerald and Ruby and had all characters unlocked in the original. I was constantly amazed at the recreation and revision in the remake.

I connected a lot more to the characters in Final Fantasy 7 Remake compared to the original due to voice acting of course and the extra bits of story that has been added. In the original game, I couldn't care less about Biggs, Wedge, and Jesse. This time around I enjoyed each of them a whole lot more thanks to the extra dialogue and story arc. I still hate Barret but I hate him just a little less in the remake than I did in the original. That dude just annoys me.

There are a lot of amazing and incredible things in Final Fantasy 7 Remake. But for me, there were just so many frustrating and needlessly annoying stupid parts that dropped my original thought score from an 8 to a 7 out of 10. The main reason for this was because even in the very end of the game I was still annoyed by stupid crap. It's a good game and I definitely recommend it, especially to fans of the original.

The first noticeable and most annoying part about Final Fantasy 7 Remake's gameplay was the forced snail's pace walking. This happens too often and is literally never used in a moment that makes any sense or offers any type of immersion. But to me that's pretty much how forced snail's pace walking is in any game I've played. Unless it's a normal part of the entire game like a walking sim, this has never been enjoyable to me when out of nowhere not only are you forced to walk slow, but a hundred times slower than you would if you went out of your own way to take time putting less pressure on the analog stick. It's ridiculous.

When it comes to combat, I'm impressed by the mix of hack-and-slash and original tactical usage of spells and abilities. That said, it was frustrating when I wanted to play my preferred character but cannot if I want to be effective. Once I got used to the method of constantly changing the character I control in order to quickly build the ATB gauge, the combat felt a whole lot better. I wasn't fully comfortable with the combat mechanics until I was 30 hours in which is kinda crappy but that was mostly my own fault.

What sucks is when you're forced to play a character by themselves which thankfully isn't too often. There's a part where you play as Cloud alone against flying enemies while climbing a tower and it was horrible. The aerial melee combat is cool but often times it was glaringly clear to me that the combat was not play tested or balanced very well. There are too many times enemies do unavoidable things which can sort of work with the block mechanic but the damage they do while blocking is too high. There's just too many imbalances in the combat when it comes to the fights that matter. 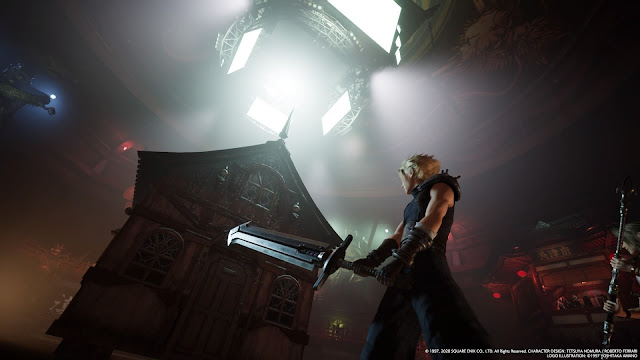 It's like 80% of Final Fantasy 7 Remake's battles are too easy and the rest are too difficult. Mostly because that balance never really gives you a real feeling of the true combat. Only after you're used to focusing on the harder fights does the combat make more sense.

Also, the debuffs last way too long. You can use items or magic to cure them but the duration of debuffs makes zero sense for the general faster paced combat. The reason these things are so easy to nitpick is because they are a consistent normal part of the game. Overall I love the combat, but I sure as heck hope to see improvements in future installments.

My favorite thing about Final Fantasy 7 Remake's gameplay is the Materia. I wasn't sure if we'd have that same sense of importance of them based on how we experienced magic in FFXV. But the Materia in FF7R matters and I love leveling them all up. The fact that it exists in the remake in the same type of manner is what I love about it. That said, I barely used magic at all throughout my playthrough other than heals. The passive bonus effect Materia is still there though and that was my favorite kind.

Summons aren't much better than they were in FFXV but at least they are noticeably better (which probably sounds weird and dumb but I dunno how else to put it). And Limit Breaks are almost as rare as the summons. Maybe even more rare. Summons will pop up if you're on a tough fight and one of your characters gets low on HP while the Limit requires taking damage. It's kind of easier to force a Summon than a Limit.

The weapon upgrade system is pretty cool. The weapon abilities were what I chose to use instead of magic. I'm still not really sure exactly how the proficiency's work but I liked unlocking the new abilities each weapon offers.

I really, badly miss randomized battles and would have loved those a lot more in this game. 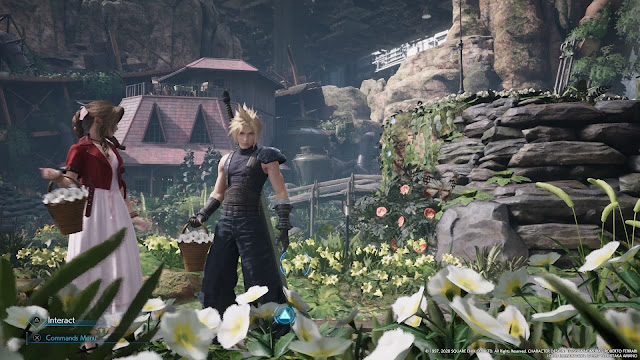 Normally I wouldn't write a separate thing about the graphics. I'm a "graphics whore" but I don't normally review them. Final Fantasy 7 Remake just had some extremely noticeable things that made me want to talk about it.

If you played the original, you probably remember how the characters themselves looked pretty crappy but the backdrops were absolutely amazing. In the remake, it's basically the reverse. Of course, being twenty-three years later, the remake characters look better.

The oddities to me are because some areas look way better than others. Basically, most outdoor areas look like crap compared to the indoor ones. It's like the Mako factories got a lot more time and detail put into them. Wall Market looks pretty amazing at night but terrible in the day. I've noticed this in almost every game, though: nighttime always looks better than day. I never understand that. Anyways, there's a noticeable difference in detail when indoors compared to outdoors.

Also, generally the textures are incredibly bad. Everything looks so ugly when you stop to look at it. There's an enormous lack in detail. There are so many things that are soft and flat. (Look at the flowers and rock in the picture above.) I'm not saying it's a bad looking game. It's not. It's just weird how many things look like crap. Obviously more work was put into the cinematics but I'm not sure why indoor areas look so much better than outdoor areas. The textures are also noticeable on the characters themselves. It's a beautiful game but it's also just like wtf? 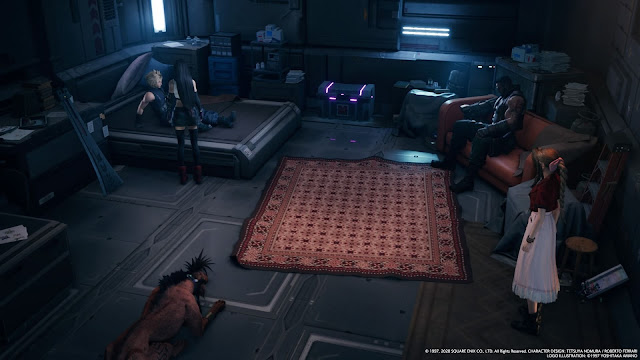 I really dug the new content that was added in Final Fantasy 7 Remake. I absolutely love the "whispers." It's funny, though, because I still can't help but think of Harry Potter when I see them but they're very cool. They add a new depth to the story and some pretty incredible visual scenes. They make sense to me too because there was a lot of weird stuff in the original story but obviously could be improved upon with newer tech.

I kept seeing a lot of complaints about "filler quests" or whatever. But I recognized at least half of them from the original. Like the kid with the cats. She was in the original game. The main difference being that you didn't have the newer exclamation quest markers and such. I liked the little quests they had. It was odd to see them in an MMORPG style but I was glad they did it so I wouldn't have to hunt them down. That said, there is a chapter in the game where you're asked to complete tasks for citizens and they are not marked for you.

This revision is incredible while poorly optimized. Before I had completed Final Fantasy 7 Remake, I kept seeing comments and headlines of how "this is a full game" and I kept thinking we already know it's not. When it comes to story, it definitely isn't the full game. But when it comes to gameplay, it is a full game. It has everything there. And by the time we complete this new remake, it will probably be three times as long as the original. I had 46 hours played by the time I completed the remake. There could be a couple hours idle but that's pretty dang good.

Cloud is a dick.

I have an album of 211 screenshots of my playthrough if you're interested in checking them out. More might be added with second playthrough. Which by the way, where the f*** is PHOTO MODE?!??!! Thanks for reading. Game on. 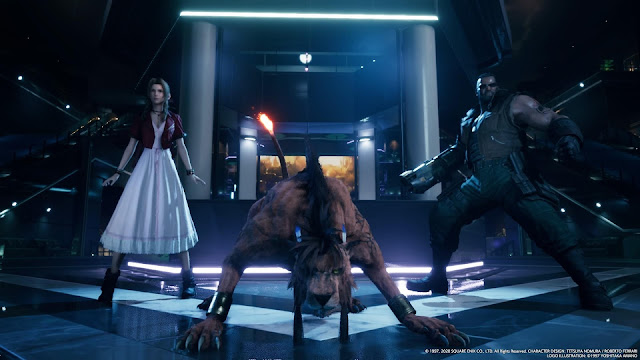 Hi,
Kotaku published an article about the behind-the-scenes of Anthem's development. It covered stressed out developers, team members that were pulled away from the project to work on other games mid-development, team leaders that ignored or avoided specific feedback and conversations, a beautiful but problematic game engine: Frostbite, a launch time that allowed no more delays, and a twelve to sixteen month period of putting the game together.
This article was a combined interview with nineteen developers, most of which remain anonymous. There is an insane amount of information about how and why things went wrong during the development process of Anthem that takes at least a full hour to read. As in-depth as it is, I feel that it doesn't have the full story and was mostly focused on the negative.

Readers taking things out of con…

Hi guys! A quick bit of advise when it comes to spending your Germ Cash: don't blow it! I know it's fun to run and get a free game but try to spend your Germ Cash wisely. Here's why: 1. You'll get a game you really want and not one you sort of want. 2. You'll allow someone else that really wants that game to get it. It's exciting to get free things! Try not to be greedy about it. :)

The list of games are mostly all for PC (a few console games including the Gears of War series and Dishonored). Hopefully in the future I'll be able to offer other giveaways as well. Most games are activated on Steam unless otherwise noted.

Note: Germ Cash price of games may be changed at any time.

Just message me on Twitch or Discord which game you'd like to spend your cash on! =)

This is a very personal article, it has nothing to do with the games at the actual E3 event.
OnLive I've been addicted to "cloud gaming" for a couple of years now. Ever since I turned on and used the OnLive service I've done everything I can to be able to share my experience of it with other gamers. I just love it so much. I found a fan forum for it, which was basically the only place that accepted the platform. Everywhere else was just a bunch of gamers telling me it couldn't work. I knew better.
I've been using the service long enough to have talked to a few staff members from time to time, on the service, and rarely on other social media. Usually if I ever see a staff member online on the service I wish them a wonderful, fun day. I care about these people that contribute to giving me this awesome cloud gaming experience. Also, every time I've ever dealt with customer service they have been super friendly and eagerly helpful.
One staff member in parti…