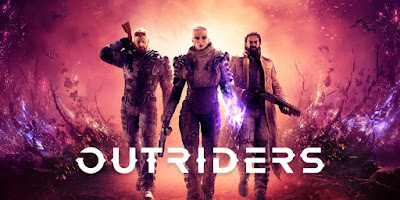 Awhile back there was news of People Can Fly working on a new game. That information had me super excited because I absolutely loved Bulletstorm. Outriders is the name of their new game and after initial gameplay footage, I was not sold on it.

The first real gameplay for Outriders that I saw was posted by Primagames who I have come to enjoy more and more lately; especially with other gaming sites turning to dog shit. But the gameplay Prima posted wasn't too impressive. I really loved the abilities and the weaponry displayed, but the footage itself was pretty meh.

But now, on the official Outriders channel, a pretty nice video has gone live with some very badass gameplay. I had a feeling that I'd want to see more gameplay made by other players based on what I had seen before. I was thinking, "I probably just don't like this player's playstyle" and after seeing this new footage that feeling was confirmed.

With this new footage, I am pretty dang excited to play Outriders. The one major issue I could tell right away is I cannot stand the health bars. They're gross and distracting. They do not blend in or even match the environments at all. These health bars are something you would see in pretty much every bad free-to-play title out there. I hope like heck People Can Fly updates those health bars asap.

You can find the new gameplay footage below. Thanks for reading. Game on.