Why I Love Realm Royale 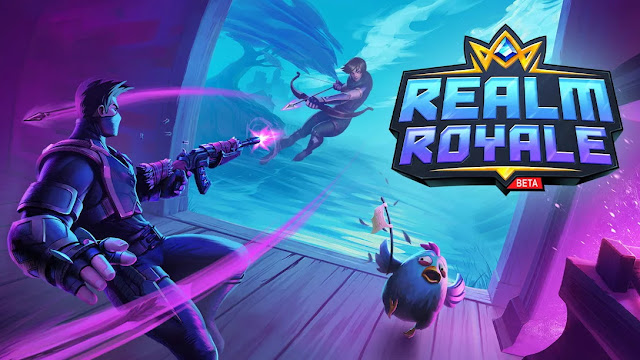 I had never been a big fan of the battle royale genre until I played Realm Royale. There are a few major reasons for that:
I think I had a couple more reasons I noted down many months back when I originally thought about writing something but I can't find it. (Grr) So all this is off the top of my head which isn't always a good thing as my memory sucks.

The number one reason I enjoy Realm Royale is a pretty key thing for me. It makes the game feel more arcadey and less survival which is exactly what I love about it. Survival is still a major part of the game but it doesn't rely on micromanagement. I feel like I can engage my opponents while relying on my own decisions and aim rather than having enough bullets.

The classes also add some flavor to the game: Mage, Warrior, Assassin, and Hunter. Every player can use any ability and weapon from each class they come across in the map. But each class has passive bonuses for the type of weapons and abilities they use. So there is a benefit of picking the class that fits your playstyle more.

One of the things I learned early on in Realm Royale was that I did not enjoy any class that wasn't the Mage. Every single time I switched classes just to change it up and level them for the heck of it, I hated every second of it. I've played the game a lot now, though, and I feel comfortable using any of the classes even though the Mage is still my absolute favorite and the one I'm most comfortable with. So if you decide to try the game out, definitely try the different classes and see how they feel before you decide you don't like it. That really can make a difference.

Sadly, there aren't a lot of players playing this wonderful game. On average there's about 15 - 20 real players in a match, while the rest are bots. Sometimes there's 30 - 40 players. That said, in my experience in a battle royale game, I'd be lucky to encounter that many players in a single match anyways. So I don't see it as being that bad but it can suck when nine out of ten of the enemies you encounter are bots. The bots in this game aren't usually slouches, though. The bastards have a freakin aimbot most of the time. Other times, you'll come across funnily bugged ones.

Another thing that sucks about Realm Royale is that the developers do not communicate with its community. As far as I can tell, it's a very small team working on the game. I think when it was new they had a larger team focused on it because battle royale was such a big deal. But now that it's quieted, the developer team for Realm got cut like crazy.

Due to this, it feels like the developer team has given up. I really believe this is due to lack of any communication at all rather than the reality of it. Not too long ago two different parts of the map got major revamps: The Lost Forge and Fungal Jungle. This was not some small change. They were mind-blowing changes to me that completely changed not only the look of that specific zone, but the feel of it and how you can play it.

But the Realm Royale community feels abandoned. Rumors have been spreading based on larger Youtubers telling people that they heard so and so from who and who. Without any official response or statement, rumors are all people have.

I didn't mean to get into the negative parts of the game but it's there, this is a part of this game that I love. A smaller player base and silence from the developer.

I've never had more fun in a battle royale game than I have with Realm Royale. I've played the other games:

I definitely recommend at least trying Realm Royale just to see how it plays. Even with its smaller player base, I always feel it's worth playing when I'm in the mood. It's just fun. I do hope that the future is bright but my expectations are that it's going to die which makes me sad. Too many excellent games die out while the crappy ones thrive. I'll never understand that.

Thanks for reading. Game on.
free to play review