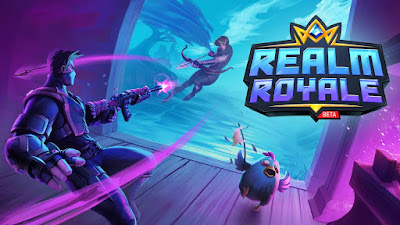 Hi! The main reason I'm writing this is because just recently I put out a post called "Why I love Realm Royale." I do love the game but I had also mentioned in that same post how players felt ignored by the developers as there has been silence for quite awhile.

Today we finally got a new post on what's to come with some small details. The update itself has been delayed. We were expecting a new patch at the end of this month, January. But it looks like it's gonna take a bit more time.

One of the biggest reasons I was having a hard time looking forward to anything in Realm Royale was because all we knew was that there would be no new Battle Pass with the new update, and there would be some new Limited Time Events. For me, the LTEs sound like a really great addition but that doesn't mean I'd actually be interested in playing them if they're not my type of thing. So with this little information, I could only hope the LTEs would be something I'd like.

In the recent Realm Royale blog we learned that the Outpost portion of the map is the next zone that has received a revamp. This is enormous news and exciting to me because the last two map revamps that they did to the Lost Forge and Fungal Jungle areas were absolutely incredible. They completely changed the world and were unrecognizable for the better. I actually like the Outpost portion of the map as it is but I definitely look forward to what they've done to it.

Forges will also have a cool update where we'll be able to upgrade our current weapon as an option, rather than only being able to randomly get a forged weapon. This is something I had seen as feedback on the Discord channel not too long ago and I'm sure it's been brought up at different times. This is a very cool addition! I wonder what exactly we can upgrade. Will it only be from Epic to Legendary or can we take a Common weapon and upgrade it repeatedly? We'll see on that one. Either way, that's awesome.

There are some other cool changes such as increasing the shards we can carry from 200 to 300. Weapons have been rebalanced (more details to come in the patch notes later). There are two brand new abilities and a new currency. If you're interested, check out the blog post. I shared my favorite stuff here. I'm very much more excited for this update as I was only expecting LTEs to be the new thing. This is a pretty impressive update and I can't wait.

Thanks for reading. Game on.
free to play thoughts