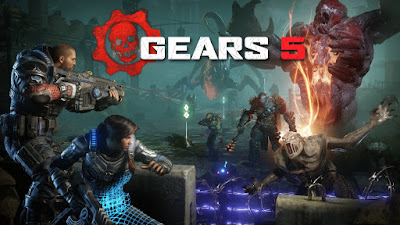 I've been playing a lot of Halo lately and I wasn't really into the multiplayer so I decided to give Gears 5 another try. Last night I jumped into a few social games and had a lot of fun. I was surprised at how much fun I had cuz I wasn't really feeling it the first time I tried it when the game was new.

The problem with the Social lobby in Gears 5 is that you can end up with bots in your matches. Basically there just aren't a lot of players playing the Social version of the game which sucks cuz I found it enjoyable enough. But then I tried Ranked. First I tried TDM ranked and that wasn't as bad but I did immediately notice almost every single player using the Gnasher weapon which in case you don't know is a shotgun.

I proceeded to play through a full match even though it was completely un-fun and just figured maybe it's just this lobby. I kind of knew better, because I remembered it was pretty much the same when I had first tried the Ranked multiplayer in Gears 5 when it was new. It had just been quite awhile since I played it. Then I played another match to give it a try and see if maybe there was a difference. During the second round of that match I had to force shut the game down. It's disgusting.

Ranked multiplayer is a disgraceful pile of shotgun spamming garbage. It would be one thing if the shotgun was just powerful and some players used it because it's fun to use. But that's not it at all. It's pretty much you either use the Gnasher or you lose. That is all. I'm guessing it's because in Ranked you literally only get to choose between two starter weapons, the rifle or the shotgun. That alone is one of the stupidest things I have ever seen.

Coalition should be ashamed of this. I did check out some of their recent tweets cuz I was curious what kind of updates they had mentioned for multiplayer. I found a few for microtransactions (surprise, surprise) and one saying they were looking at feedback about the Gnasher. I don't understand how this is still a thing when it's been like that since day one.
thoughts