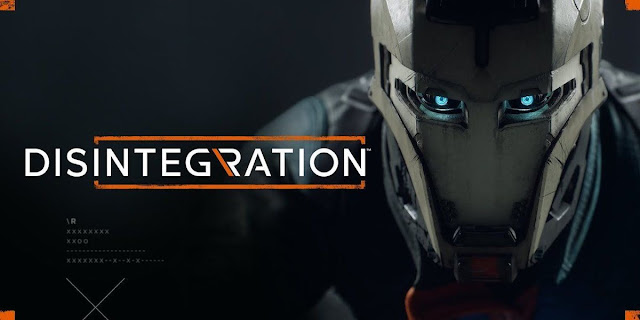 Disentregation, for me, is one of those games that before it launches, I wish and hope like crazy it doesn't "fail." The game is amazing. It is special. It's not something you've never seen before, but it has enough twist to make it not only familiar but also new.

For any long time FPS gamer, Disentegration will be easy to jump into and for the most part understand. I have seen some ridiculously noob questions and comments in the Discord channel that make me laugh because I can't help but think, "this is the first FPS or video game they've ever played in their life." I also can't help but think, "parents, please keep your damn kids off my games" (mine did). Anyways...

I am truly blown away by how well balanced Disentegration feels in a Beta form. Not many games have this kind of very noticeable deep thought and as perfected as possible gameplay while in Beta form. The map design was immediately noticeable to me. Laned, but with enough opportunity to flank. (I can't stand most CoD maps because of that nonsensical left, right, middle camping garbage.)

The pacing, while some would consider it short, is about an average of ten minutes per match. Of course, once everybody learns what they're doing, or a team that knows what they're doing versus a team that doesn't, that time will change. As we're all noobs in the Beta, the pacing to me feels perfect. Not too long, not too short, generally speaking.

What's different about Disentegration is a very small thing that gives it a drastic different feeling: A.I. troops that you control. So far, other than granting different abilities to your ship, it's hard to tell how well the NPCs themselves perform on the field versus other enemies. It's obvious to me that they definitely make an impact on the field, but I can't tell how much damage they do for example. I just know that while they are alive, they definitely make a difference but in a way that makes it obvious that as the player, I am far more important and the key to overall gameplay.

It has a MOBA type of feeling only in that very small part where you command bots to either fight other bots or your player enemies. Other than that, there's nothing MOBA about it in the sense of something like League of Legends. I say that specifically as "MOBA" can kind of mean different things.

While alive, the A.I. will target any enemy on the field that you command at the press of a single button/key. You can also order the Crew to defend/attack a specific spot on the map but they will automatically come to you if you start getting out of range (which I love). Also, while alive, they provide you with extra abilities such as grenades, missiles, healing stations, things like that. I'm still not overly familiar with every single loadout. If you know me, I'm always playing that SMG type class. OMG that's another thing!...

As far as I can tell, Disentegration has filled the spots for any kind of playstyle that exists. As I mentioned before, it's not exactly the same as other FPS games but it is familiar enough. You can run-and-gun, snipe, and between those are the different weapon types based on the ship you choose. The ship is your main weapon basically. And based on the ship you choose, the A.I. troops that join you have an automatic loadout attached to them. I don't exactly like that, I'm wondering/hoping we might be able to choose our Crew loadout separately from the Ship loadout. But I do imagine a LOT of balancing would be involved in that kind of situation so it does make sense that the ship you choose has a certain type of A.I. Crew assigned to it.

I am deeply impressed by what I have seen in the Beta for Disentegration. I can't help but worry because in the past ten years or more, I have seen what happens to absolutely incredible indie games, especially when they're multiplayer focused. The most amazing games die like they were nothing, guys. Some of the best games the industry has ever seen just die because they didn't get the publicity and playerbase that they damn well deserved. I'm sure you can think of them right this second.

Disentegration is going to launch with a $50 price tag. It will have a campaign! From what I've read and seen in their discord, apparently Halo developers are a part of the team. I had no idea of this. I remember seeing the game and thinking it looked super freakin cool and I was like, "yeahhhhhh gimme!" I'm guessing maybe for some of you out there, knowing that Halo: Reach developers worked on this might make you take an extra look and I sure as heck hope so.

From the very first match I played of Disentegration, I could tell that an incredible and deep amount of not only love but also testing went into this game before they even made it available to the public. It is ridiculously impressive. It makes perfect sense that there's a team here that has learned a lot from other games they have worked on. This is a truly fun and special game.

The Closed and Open betas are very limited time wise. And if I wasn't so interested in this game, I would not have bothered taking the time to try it during it's two-day closed beta. I am so glad I did. I have played it almost all day. The Open Beta is January 31 to February 1 on PC/XB1/PS4. Do yourself a favor and give it a try. Play a match and if you're like me, you won't wanna stop. That said, I am already kind of bored of the maps and I feel ANY multiplayer game needs to launch with a bare minimum of six different maps. This Beta has two and I'm not too sure about the launch.

Quick note: the Retrieval game mode is amazing! Thank you for reading! Game on.