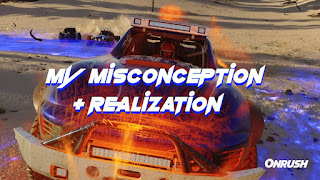 I had pretty much the same thoughts of every single negative bit of feedback that I see others posting on reddit and twitter about the Onrush open beta. I also kept seeing others tweeting about how people "don't understand the game" and I didn't know what they were talking about. You drive, you boost, you have abilities, and there's a goal. What's not to understand?

I found out they were right!

My misconception about Onrush was that I was supposed to boost the whole time. After several hours of playing that way and being bored, I kept returning to the Beta because I really wanted to like the game and I wanted to know what the hell people meant by "understanding" it. It drove me nuts. What was I missing?!?!

I decided to stop boosting and started to try and collect all those cute little icon things that are all over the road for fun more than anything else. (I still have no idea what they do.) I also decided to focus on smashing fodder just for the heck of it. That was when I realized how Onrush is meant to be played. Not specifically because of the fodder, or the little collectible icons, but because while I was doing that I slowed down my playstyle and noticed I was inside of the Stampede as well as the opponent team far more often.

That was when I really noticed how teamwork actually works in Onrush.

See, the presentation of Onrush is super flashy and high paced. I assumed that because I could practically keep my boost meter full the whole time that I should boost the whole time. That is not the case. It's all about managing boost to reach the objective whether it's the Overdrive point cap or getting through Gates properly (the only two game modes available in Beta).

Once I came to this realization Onrush really changed and became tons of fun. I can't wait to play more once the game launches on June 5th.