My Thoughts On The Wolf Among Us Episode 1 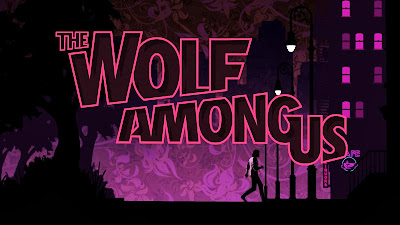 In The Wolf Among Us, Fables have been exiled from their Homeland and live in the real world using magic called Glamour to hide their true selves from us. Many of the Fables struggle to survive in the real world. Fantasy and happiness are no longer a part of their lives. This is a tale of devastation, sadness, and memories long past.

You play as Sheriff Bigby Wolf, a Fable struggling with his own inner Bad Wolf, who does what he can to keep the Fables from killing each other, and to keep the city safe and make sure that Fables are always in disguise, which often proves troublesome.  Bigby has a bad rep and the other Fables fear him but he's trying to redeem himself.

I had fallen in love with Telltale Games characters and story-telling in The Walking Dead game, but I am far more interested in the Fables of The Wolf Among Us like Snow White, Beauty and the Beast, Ichabod Crane, and more in the first episode alone, than I am in survivors of a zombie apocalypse.

As you play the game you gain insights into each of the Fabled characters through the "Book of Fables" that tells you more about the characters after you meet them in the game. I thought it was really cool because I never read the Fable comic books so I had no idea what exactly they were about. I had read a tiny bit to know the comics were about famous fabled characters but I didn't look too deep into it.

Fables are hard to kill, but they aren't completely invincible. They can still feel pain, and they can still die. A Fable hasn't died in a very long time though, and The Wolf Among Us Episode 1 jumps us into some quick action before discovering a murder.

The controls are a little weird on the keyboard. There's just a tiny struggle to walk in a straight line; that can be expected though, can't it? It isn't troublesome though because you only use it to navigate your character through the world. It won't ruin any action scenes and it's not overly bothersome, it was just noticeable.

The thing that stood out to me the most was how well the Quick-Time Events were handled for keyboard users. When prompted with the A, S, D, and W keys, you also see an animated arrow showing the direction you need to move integrated into the button prompt. The visuals on the arrows are not distracting and blend right in but are noticeable enough to follow them perfectly. Thank you so much for that Telltale! I do think developers could get rid of the A, S, D, and W prompts completely and just show the direction arrows. Why do they keep insisting on showing the keys?!

There are a few button masher prompts in the game. Normally these are my most hated QTEs. However, in The Wolf Among Us they actually felt like they mattered. You don't just mash a button to open a door or something silly like that. When you need to mash a button is when there is an actual struggle going on during the combat scene. Even though I would prefer it not to be there, it felt like it belonged.

Unfortunately there isn't a lot of actual interaction... again. This is Tell-A-Tale Games after all. I love the gameplay enough to want more, and they keep disappointing me! Thankfully the rare action scenes you do encounter in The Wolf Among Us Episode 1 are actually pretty action packed!

I'm not going to spoil anything for you. I just want to say that I am completely fascinated by the stories involved in the world of The Wolf Among Us. It makes me want to read the Fables comic book that it is based on. I've always loved the Fabled characters, and this is an interesting take on it. Nothing about the original stories are ruined because they haven't been changed. The characters are now living in our world under real circumstances while their fairy-tale has been long past.

The music is amazing. It sets the mood with the perfect combination of creepy, yet serene.

I wanted to play the episode again immediately after completing it so I could see how the other choices played out.

As for the rest of the game you'll need to find out for yourself. These lips are sealed. =) Please feel free to check out some more of my screenshots of The Wolf Among Us Episode 1. (Possible spoilers.)