What I've Been Playing On My New Gaming PC 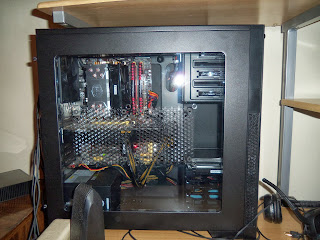 Hey guys! So I got a new gaming PC. It was a birthday present. It's also my first gaming PC ever and oh boy... I had no idea just how different the world would be with a real actual gaming PC. It certainly helps with the multiplayer games! My gosh.

I believe the very first game I started with on my new gaming PC was Grand Theft Auto IV. I never really played much of the game. I don't have a lot of interest in being a criminal and killing good guys. Fortunately in GTAIV you're mostly killing other bad guys. The reason I played this game first was because even though the graphics are not that great, my old PC could not run it smoothly on the highest settings, and I had to run it on medium just to be able to really play. It always drove me nuts cuz seriously the default graphics are not that intense... without mods that is.

The first time I saw a video for the icEnhancer mod blew my mind. Many of the big gaming sites had shared it awhile back. I wasn't playing the game at the time, but I was still very impressed with what the mod could do. I knew my old PC would have been nowhere close to handling it. So, after running GTAIV for the first time on my new PC on the highest settings just to have a look, I then went out and got the mod. It makes the game especially enjoyable for me because I basically get to play from start to finish as a brand new experience as if it were a brand new game. And it sure does look amazing. I still can't get over how a fan-made mod can do this. The creator has been working on an update that makes the game photo-realistic! I plan to write more about my actual gameplay experience with GTAIV hopefully soon. More screenshots.

Then I played Tomb Raider which wasn't too much of an improvement cuz thankfully the game was optimized really well and my older PC could play it on High settings pretty nicely. The tesselation effect is great though, and of course it runs a lot smoother on my new PC without any chugs in frame rates. (I don't know technical stuff but I believe I'm explaining that right). The campaign doesn't have the same exact true "experience" feeling as it did when I first played through it. That's of course because I already experienced it all. Incredible game.

There's nothing like going from 10fps to 30+ or whatever (I haven't actually looked, but it's friggin perfect) in a multiplayer match. And having graphics at ultimate settings has finally shown me why it's so easy for people to get kills when you can't see them. I'm always complaining about campers in shooting games, and they are still a problem, but being able to actually see across the map is a-whole-nother story. It was time to try some Far Cry 3. Here's where playing on the highest settings in multiplayer finally stood out to me. What a difference! Chugging along in a campaign is quite tolerable to me, but it made multiplayer practically impossible to enjoy on my older PC. Now Far Cry 3 is one of my favorite multiplayer games.

Battlefield 3. The epic-nosity (did I just make that word up?) of this game always impressed me. The camping still annoys me (it always will in shooters, which is why I stopped playing them as often as I did when I was younger). Experiencing the full scale battle in ultimate settings is pure awesome. I was in a few games today on a team that dominated the opposing team. And there was nothing to do except camp the enemies spawn. It was boring! I'm still not very good at Far Cry 3 and Battlefield 3 multiplayer. I'm not exactly terrible but I still need to learn the maps. It's definitely a million times more enjoyable now that I can actually see around me clearly.

Need For Speed: Most Wanted! I love this game! The graphics are freakin gorgeous! Similarly to Tomb Raider it wasn't a vast improvement, but it sure is noticeable. My old PC couldn't even run actual Most Wanted races. Every time the cut-scene would start my game would crash. So that was terrible and made me not wanna play more. And it was definitely on the chuggier side which made racing hard during some courses. Now I can play it much better since it runs smooth.

I was used to playing games from anywhere between 4 and 12fps for years. Of course I could have run them at higher frame rates if I had just lowered my graphic settings. But lowering the visuals was never really acceptable to me. I only did it if I absolutely had to. I'd rather play a beautiful looking game chugging along, than play it looking like crap. Graphics matter to me.

So... I wrote this just to share what I've been playing, and to basically let you know I haven't died on my blog. I've been really busy writing stuff for my new gaming site and for ZoKnowsGaming, sometimes GamersRevenge, so I'm a bit busy with those.

Now for my PC specs! It's a Vanquish Level 3 from Digital Storm. (You have to scroll way down to the bottom of the page to see the levels.) Here's what it's got:

I have no idea what any of that means which is why I buy pre-built. I'm very happy with it so far. It's as if it demands me for more! =)