My Thoughts On Dungeon Siege 3 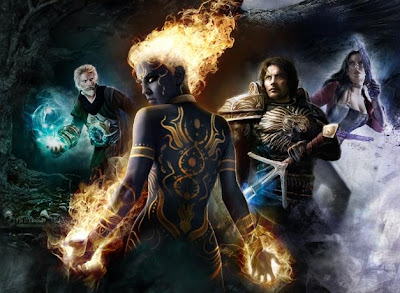 I really love Dungeon Siege 3. I have no idea why it receives so much hate from fans of the first two games. Maybe because 3 is so linear? It may be linear but the gameplay is excellent and fun, and the graphics are absolutely gorgeous. Oh and guess what else? The story is pretty good too! The story won't blow your mind or anything but it's good, and long. As with a lot of games, I took my time with this one. Sometimes I would play a really long session, but then I wouldn't play for a month or so. So there's probably some really cool stuff I could mention that I've completely forgotten. I just have too many games to play! Below are my impressions of almost 40 hours of solo gameplay in a single campaign.

The gameplay is very similar to Diablo style games but offers you control with the W, A, S, and D keys. (You can use a controller. I haven't so I don't know what the controls are like on that.) Better still is the fact that you can remap the keys! If you prefer the point-and-click action you can still do that also. The controls are a bit funky to get used to at first but once you do they work great. I played as the monk/wizard guy - Reinhart. The really cool thing about the combat in the game is that you can switch between two types of playstyle on demand which is actually necessary but doesn't feel forced either. Reinhart switches between using magic from a distance and meleeing his enemies. Each form of combat has three different special offensive abilities on top of your basic attack, and three defensive abilities. While you only have a few special attacks per combat form, it really adds a nice variety of moves to play with.

I want to tell you how mana works because I think it's pretty cool and is the reason that it's necessary to switch between your combat styles. You gain mana just by using your basic attack on enemies, so you're never really limited to one type of attack. You can use magic as much as you want but you do need to use your basic attack just as often. You can burn up your mana by casting your most powerful spell repeatedly if it doesn't have a cooldown (and chain different spells of course), but you won't be able to spam spells without having to switch to basic attacks to get enough mana back to keep it up. I really like the way it works, it's a nice fluid mix of combat. 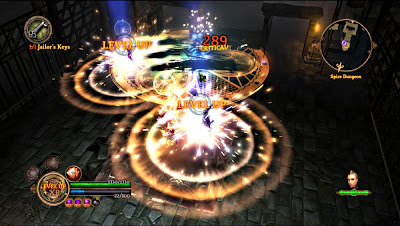 While you level up you can customize your abilities in the talent trees. Eventually you'll basically fill out every single talent by the end of the game. There are two types of talent trees. One tree enhances your abilities with increased damage, bonus effects like damage over time, or longer durations of spell effects and such. The other tree enhances your characteristics with improved defense, magic power, crit chance, or how much gold you get from drops; stuff like that. 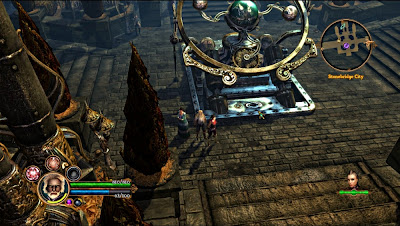 Most of the world of Ehb is pretty dark. It's still very beautiful though and extremely detailed. As an artist I can see the intricate details that went into the design of the buildings, characters, even the armor, and it really impresses me. Especially since it's an ARPG. Not that ARPG's look bad or anything, but this is definitely the most visually detailed one I've played. I think Diablo 3 is gorgeous but Dungeon Siege 3 is even better looking in my opinion which is even more impressive since it's an older game. I didn't realize how dark the world was until I was going through my screenshots looking for a reminder of some of the things I'd done in the game. It's all pretty dark but there's a wonderful mix of beautiful light and lightened area's in the cities as well. There is a really great mix of travelling out in the open world, and exploring dungeons. There are so many different and truly beautiful locations to enjoy. I can't say enough how impressed I am with the graphics.

There are multiple paths to take while traversing the world and dungeons but it is pretty linear. Fortunately I really liked the story and the gameplay so I didn't get bored by its linearity. While playing through the game you meet up with each of the different characters you can play as, and they will join you as a companion and fight alongside you. You will get to choose which one sticks around. During a lot of the story you get to pick through dialogue options much like in Mass Effect or Kingdoms of Amalur. I don't think the choices you pick actually have a real effect on the game but they did make me feel like I was a part of the story. 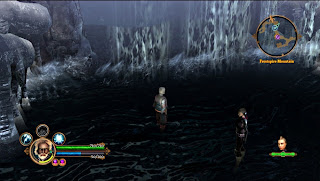 I almost forgot about the loot! The loot is rewarding. The game is not quite the farm machine as the Diablo games but it offers similar fun combat with a rewarding feeling. And the armor and weapons look really freakin cool and often look alive! I think the game offers a really wonderful single-player experience. It would be cool if you could jump online and play with random people if the playerbase was there, but I didn't think it was necessary. I also really liked the Treasures of the Sun DLC. I'm not sure exactly how much more content it added as I've taken plenty of breaks between game time, but I know it offers a pretty fair amount for a DLC pack. If you're interested, I have a lot more beautiful screenshots. I will definitely play through the game again with the other characters. Maybe we can play together. Thanks for reading!
review