I'm not sure how to feel about the game. The story was bland, but it was Spider-Man. I think I've just seen this same exact story told so many times about Spider-Man that it just kept me uninterested. I can't even describe the plot, that's how boring it was to me. That said, I loved the characters! Lizard was great, the main bad guy, Smythe, was pretty cool, Gwen was wonderful, even some News lady I didn't know was pretty cool. (I haven't followed the comic books in a very long time.) The characters were interesting to me, just not the plot. 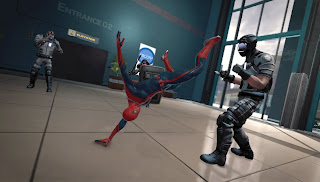 The combat was great! It reminded me a lot of the Edge of Time game. The action was very fluid and totally badass. Button spamming rewards you with a flurry of attacks on the enemies with a counter-attack pause when necessary. Once you face bash your enemies enough they get a stun icon over their heads that prompts you to finish them off with a webbing that seals them up completely.

They even had stealth finisher type moves in the game. I could sneak up on enemies and spin them into webs before they even knew I was there. Dropping down on enemies from the ceiling, spinning them in a web and then sticking them back up to the ceiling, while other enemies in the same room had no clue. I could do it to two enemies at once also, which was totally cool! 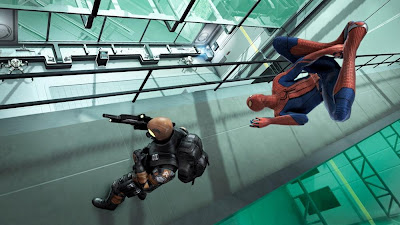 Other than the combat itself, I'd run into trouble knowing which direction I was heading if I got turned around because everything looked the same. It's like when you're going down a hallway and run into a few enemies, so you stop and fight them. Then after you've defeated them you can't tell which direction you were going. It's not that big of a deal because you eventually do find the right way, but it is annoying. 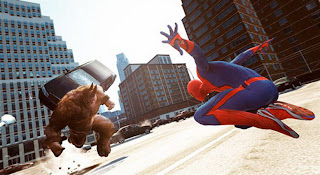 The bosses are totally epic looking and badass, but the actual fight mechanics were pretty simple. Spam punch, dodge a couple times, then repeat a few times. That was basically it for every single one of them. They did offer really cool action scenes.

Definitely the coolest part about the game! Web-slinging around the city is really awesome. The animations are pretty great. There doesn't seem to be a lot of different mission types. Most of it is just rescuing citizens. Stopping muggings or carrying sick citizens or escaped mental patients back to where they need to go. It's super fun though. Just being Spider-Man rescuing people is what it's all about! There are a couple of other mission types but it seems the majority of them are rescuing and returning citizens. There are cool missions involved with Felicia Hardy and stopping bank robberies. Being a rental, I didn't really care too much to get too deep into the open world. I can see that it offers a lot of cool extra's though. 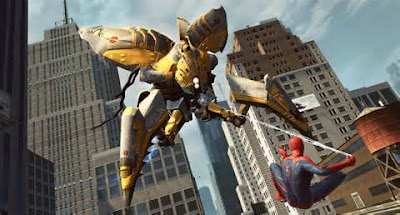 One of my favorite parts during the game was fighting off these winged robots. You literally web-sling around the city while fighting them off. Shooting webs at them to slow them down or blind them, and then climbing on top of them to break off their wings, bringing them to a cinematic destruction. Just the fact that you fight off enemies while flying around was really cool to me. I really enjoyed the mechanics.

The graphics are nice, but unimpressive. The characters and bosses are pretty nicely detailed but when you get into the city, it's just like flying through a bunch of big blocks. That's just from a "graphics whore" point of view though. I love uber graphics man. You can see for yourself in the screenshots that the graphics aren't terrible. They just seem really simplistic is all. 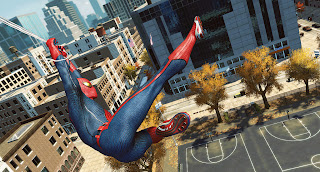 The controls alone made me just want to send the game back. I was frustrated half the time I played the game just because of how bad they were. I'd get stuck on railings, even though in some parts of the game I'd automatically walk off of a ledge, in most cases I wouldn't. I'd end up having to jump off the railing or ledge to remove myself from it and then I'd be jumping too far.

On top of that, when I moved from the ground to stick to a wall, the camera would get completely flipped around so I couldn't even tell where the heck I just came from. Not a big deal you know? Just really freaking annoying.

That's not even the worst of it. The R1 button is your main grab button, or action button that you need to use for most interactive prompts; kind of like how the E key is on most PC games. The problem here is you can't just tap it to perform the action. You have to hold it for a split second or longer, let go, and then it activates. On top of that weirdness, it wouldn't always co-operate! There are many key points throughout the game where I would use R1 to slow/freeze time (spider sense and all that) to target what or where I wanted to perform my next action. For some reason it was often hard to stick myself to different parts of the walls or floors and ceilings. The game just would not let me go wherever I wanted to. It seemed to have these key points that were like place-markers that I had to go to. Not that big of a deal, but it definitely takes away from the flow of the action.

Also because of the way you have to press and hold the button, rather than just tap it; it was frustrating trying to grab the comic books out in the open world. A lot of times I'd have a split second to tap that button, I'd tap it but since it's a hold and release mechanic, I'd fly right by the comic books I wanted to collect. Then if I wanted to turn around and collect it, I'd end up circling the friggin thing five to ten times just to finally collect it. 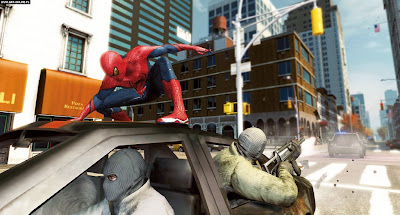 I was thinking about this for a bit. I definitely think having a game as a rental affects my mood while playing a game. I rush myself to get through these rentals quickly, so I can get my next rental. So this makes me a bit more harsh on the problems that stand out. I don't think it's that big of a deal, but I do think it matters when it comes to reviewing a game.

Overall, I had fun. The game is really freakin cool. Just like in Edge of Time, I felt like I was Spider-Man, and I was a total badass. If I were to be more open to taking my time and not rushing through the game, I have no doubt I would have enjoyed it more. But those control issues were definitely highly frustrating.
review