I was fortunate enough to speak with Jackson, a creative writer for the game, but came home to find out that not only was all the information I got from him available on their Kickstarter page, but a million times more, so I'm going to point you in the right direction.

The Kickstarter is ending pretty soon so give it a look! It's a PvP focused game, it will have PvE. It looks really cool, reminds me of games like Forge, Archeblade, and Panzar and even God of War: Ascension's multiplayer (although of course the quality isn't quite there yet.)

The game is meant to be a lot more "skill based" with its one-hit kills that are blockable. It's going to have what they call "Fast Battles" that are basically quick matches you can jump into, and then "Faction Battles" which are more focused on guild type PvP in larger scale warfare. There's also a "Horde" mode that is playable offline and online! There's no leveling system but there will be unlockable weapons and features depending on your rank.

Your playstyle will be effected by not only your class, but the race you choose. Different races have their own abilities and actions for each class. For example, Kham Warriors are stronger than Shinse Warriors but are slower. And the whole idea is for each race to have their own animations for how they attack.

There is an incredible amount of details for their game on their Kickstarter page, check it out! They also have a multiplayer combat demonstration video!

I continued my stroll around the show and came across a student project game. I stopped for a sec to have a look and see what this one was all about.

Time Glitch is a quick two-and-a-half to three-hour game, depending on how long it takes you to solve its puzzles, spanning over five levels. It was made by college students as part of a contest hosted by the Entertainment Software Association (ESA). Kyle Reynolds (pictured below, right) and Laurencio Baland (below, left) were two of the students I spoke with. I asked them if they had heard about Nitronic Rush and was surprised that they answered "no". How dare they? Just kidding. 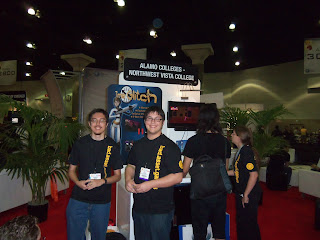 The game was made using the C-sharp programming language and Photoshop. The team that made the game consisted of fifteen people; they made it in twelve weeks.

Kyle, one of the artists,  was very pleased with the logo he came up with for the game. I'm pleased with it too. He also drew up the main character Alexis. Great job dude!


Laurencio, Model Artist, came up with the robot T-rex. He said a lot of his personality was put into it. We had a good laugh because he described the T-rex as "super evil".

Alexis' gun can manipulate objects by freezing them in place, slowing them down, or even speeding them up which is used to solve the different puzzles you'll come across. 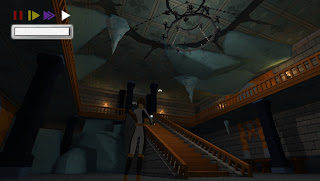 Different levels consist of a Medieval Age, Ice Age, and Dinosaur Age. There are some entertaining traps throughout the little bit that I played. Spikes launch out of the wall and impale you if you step on the wrong pedestal, and ceilings smash down on you. All of this is counteracted by your very powerful gun that can freeze them in place. You also come across catapults that launch you different distances depending on which power you use to manipulate them with.

I like the voice acting; it sounds natural to me. I think this team definitely deserves some props. It's a fun game. I wish them all the best in their future. I also love that they call themselves Bad.Asset.Games. You can play their game for free by downloading it from their site. They also have a Facebook page so stop by and say "hi".


Quick Look At: The Crew

I was insanely excited about this game when I saw it during Ubisoft's press conference. A racing game that you can play single-player but seamlessly move into multiplayer is amazing to me. I love to be able to play on my own when I feel like it, and then just jump right into making new friends, or playing with friends I already have in an instant. 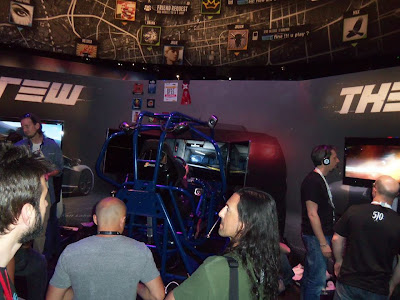 At E3, there were two representatives of Ubisoft on top of a circular platform that was maybe three feet off of the ground, surrounded by a cushioned bench. They gave commentary for a gameplay demonstration. People were sitting around the stage and able to look in just about any direction at the monitor displays up in the ceiling. There was also a really cool arcade seat that looked like it was inside a buggy cage where you could sit in it and play the demo. 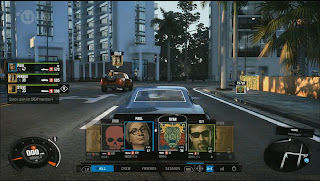 They didn't explain how the seamless multiplayer works exactly. What I did learn is that you can be racing a single player mission and be teleported instantly into a multiplayer game. And you can join it while it's arleady mid-race! I'm also looking forward to Need For Speed: Rivals for a similar experience. 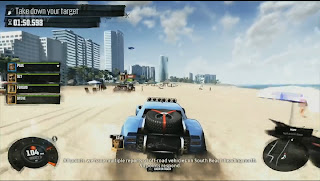 On top of all that, because of cloud technology, you can travel the entirety of America with no loading screens!  You can drive from California to New York without ever seeing a loading screen. And it's open world so you can drive anywhere at all.