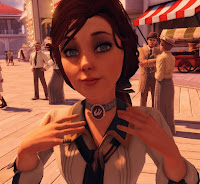 Elizabeth Is The Star


She is so full of life. She stops to look at everything. She loves life even after being trapped in a tower for most of it. Being free allows her to express her love for life. You can really see it in the way she interacts with the world. Twirling around while admiring the sky, or jumping into a crowd of dancers. And you could hear it in her words, her awe of the beauty in the world. Knowing these things about her, she still remains mysterious which was pretty cool. I knew enough about her to like, and still wanted to know more.

I cared about her throughout the whole game. I wanted to know what she would do next. I was anticipating every single new insight into who she was. I loved how she would react to NPC's in the game that smoked cigarette's by coughing. She also has a great sense of humor.

She's full of tricks and knowledge because she read a lot of books while trapped in a tower. Beauty & the Beast anyone? Still, it gave her a lot of character, and I fell in love with her. I wanted to protect her, but instead, she protected me by supplying me with ammo, health, and salts (mana); all of this while mid-combat. She'd even give me money she found, and picked locks on doors.

Elizabeth reacts to the gruesome deaths of your enemies. She resents you for being a murderer, but she also understands that you're a protector, that this is what you have to do, maybe just not so violently. 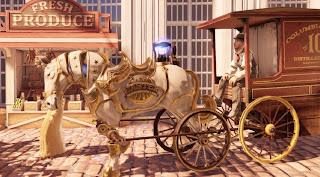 
Everywhere I walked in the game had me gaping and saying aloud, "Wow!" To me it was magical to see all the different buildings floating in the sky. Beautiful statues made of gold, also seeming to float in the middle of the air.

Of course, there's also lots of really beautiful statues that aren't made of gold. Floating waterfalls where the water rolls over the air and just drops down through the clouds. The game eventually explains how the city floats in the air, it's pretty neat and I won't spoil that; just letting you know that it is explained. It's all so beautiful, and it felt alive. I think that's mostly due to all the non-player character's that speak to you as if you were there. When you walk in front of someone they address you as they would anybody walking near them.

Characters that you fight against are strange and wonderful looking. Some are dressed up as minotaur looking creatures, others are dressed as a cupid mixed with a centaur. The whole atmosphere is amazing.

I really love the graphics style. It's like you're wandering through a painting. I was very happily pleased that the PS3 version wasn't a super toned down one. A lot of games lose great graphical fidelity when put on the consoles. I imagine the PC version has some details that are better, but it is definitely gorgeous on the PS3 and I give big props to Irrational Games for making that happen.


First-person shooter. Really cool power choices. My preference was to summon crows on the enemies, watching them peck out their eyes and swarming their bodies, stunning them as I finish them off with my shotgun. I didn't really play around with the other powers, I just stuck with what I liked.

The ability to summon up a decoy for enemies to attack was also pretty cool. They're all cool but the mechanic of the decoy stood out to me. When you select the power, a green colored clone of yourself appears in front of you and allows you to place it wherever you want. It then takes form and looks like an exact replica, without the green color. 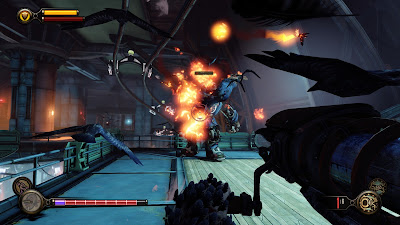 The game had noticeably smooth controls. Another thing that was noticeable was when I would collect items from Elizabeth. She would call out to me, I'd hit the command prompt to collect from her, the game automatically turned my character in her direction to collect the item, then it automatically turned back to exactly where I was previously facing. This way, I never got confused by which direction I was facing before. I really loved this small detail.

Another cool thing is that while Elizabeth travels with you everywhere, she stays out of your way. She won't get you stuck in a doorway by standing in front of you. If she does end up in front of you at some point, as soon as you think "get the f*** out of my way" she's already moving. It's kind of funny, and definitely cool. 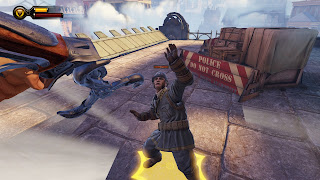 A noticeable bad thing was having to run back and forth in the same level repeatedly. That always just drives me nuts. While I do appreciate being able to experience the glory of these beautiful levels, I just don't like running back and forth for tedious tasks that don't really add anything to the gameplay or the story. This doesn't happen often though.

Another thing I was annoyed by were parts in the game where you open a tear in the fabric of time and space or whatever. Elizabeth would keep saying "If we go through this, I don't think we can come back" as if you had a choice. You don't, you need to go through in order to progress through the game. I suppose it's a reminder to go loot up whatever treasures you want before moving on. I just thought it was a little silly. 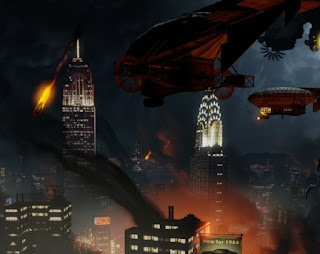 
The story is really cool, but it did not drive me through the game. I thought that was pretty disappointing. I was bored through most of it. There's a mystery behind what your actual goal is, maybe too much mystery. You're trying to save a girl that you apparently already handed over to some bad dudes as a means to clear a debt. A very interesting aspect of the story is dealing with alternate time-lines, but it never really fully develops. The whole point of the story is to be unknown until the end. But that's why I was bored by it. 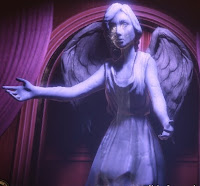 With how much hype there is over the game I was definitely expecting more and I think that kind of ruined my overall experience. I was expecting the game to be amazing throughout its entirety, but instead it was pretty generic. Kill bad guys over and over with awesome extreme violence.

Much like Halo, by the time I played it I couldn't believe people were acting like it was the best game ever. It always makes me sad because it really does have an affect on how you experience a game. Expecting it to be as amazing as everyone says it is, then finding out the only thing that sets it apart from other games like it is the scenery. Please, stop this over-hyping madness!

I wouldn't have cared about the game if it wasn't for Elizabeth. I probably would have been even more bored if she wasn't at my side adding in her thoughts on what was happening, and her self discovery as you learn her story. Not that the game isn't super cool or anything, I just didn't have anything to care about for a very long time besides Elizabeth. Most of the game was just killing bad guys. Why this matters to me is because the grander scheme had a really great story, it just wasn't told. You have the basic idea but you never know anything until the end of the game.

I'll tell you this though. If I was a rich gamer, I'd pay $60 just to have experienced the ending of this game. The finale was a decent duration (I believe at least an hour long) and it blew my mind. Mind you, I did not go reading spoilers and reviews for the game. I had read maybe tiny pieces on it, mostly just opinions, and seen some screenshots. I played this game with a completely fresh look that was only ruined by hype. I hope you can do the same. If anything was spoiled for you, you might be even more disappointed than I was.

The worst thing that stood out the most to me is that there is no New Game Plus. I mean seriously? Come on! Bastuds. 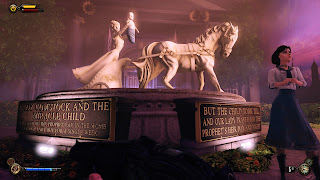 "City at the bottom of the ocean? pfft Ridiculous." -Booker